Based in San Francisco, Dana Hemenway's work ranges from sculpture to video to site-specific installation. Dana received an MFA from Mills College, and has had residencies at the Bemis Center for Contemporary Art in Omaha, Nebraska, and Root Division in San Francisco. Her work has been exhibited locally, nationally, and internationally. Dana is currently a co-director at Royal Nonesuch Gallery, an artist-run project space in Oakland, CA. 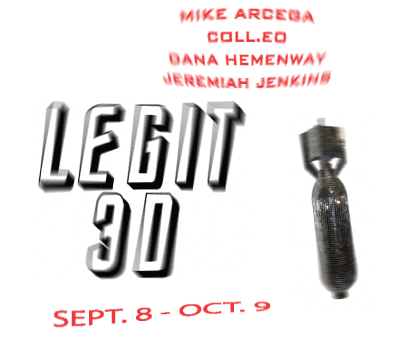 I was born in a valley in the Appalachian mountains. I grew up in the woods playing with deer and horses. My mom hung old tools and antiques on the wall of our kitchen like a museum. When I was 11, a friend of my mom's came to our house. My grandfather showed up and opened the back hatch of his baby blue Plymouth Omni. He pulled the carpet aside and began to lay out several handguns. My mother's friend began test firing them at two large logs stacked on top of each other. On his last shot with the Glock 9mm the top log fell off. While the men started talking cash I ran to the target. The last bullet had gone in between the logs and wedged them apart. The bullet was laying there at the end of a groove carved into the exposed wood grain. This is what making art is like for me. The moments when things come together by chance, accident, or force to form a new point of orientation, like crossing lines on a map. —Jeremiah Jenkins

Michael Arcega was born in Manila, Philippines, and currently lives and works in San Francisco California, where he is an Assistant Professor at San Francisco State University.

COLL.EO is a collaboration between Colleen Flaherty and Matteo Bittanti established in 2012. COLL.EO currently operates in San Francisco and Milan.